Find this article at:
go.ncsu.edu/readext?790633
— Written By Robert Branan

The Fourth Circuit Court of Appeals recently affirmed an appraiser’s accounting of future use in establishing the value of a tract of real property “taken” by the government for public use. The case also illustrates the operation of the Equal Access to Justice Act (EAJA) in awarding attorneys fees and costs of condemnation to qualified owners of the taken property.

The US Constitution Fifth Amendment reads “nor shall private property be taken for public use, without just compensation.” When a government body employs its power to take property – called eminent domain – it must pay the landowner value of the property taken. While the use of eminent domain of results in full transfer of title to the property, such power can also be used to place a restriction – in the form of an easement – on the real property’s use that reduces its fair market value. 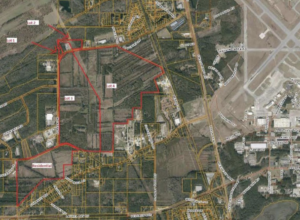 (Such easements are distinguished from “inverse condemnation,” whereby the government uses lawful power in a manner which reduces a property’s use – e.g. zoning, intensional flooding – but does not offer compensation.) When such partial takings occur, the primary argument is usually how much the government (the public) owes the landowner for the loss in value resulting from use restrictions placed on the property.

In this case – US v. 269 Acres Located in Beaufort (SC) – the US Department of Defense imposed a restrictive easement on property nearby the Marine Corps air base in Beaufort, SC. The easement – similar in form to a conservation easement – restricted parcel subdivision and other industrial or residential development on the property, reserving farm and timber use (but prohibiting activities likely to attract birds). The matter came before the District Court for South Carolina to affirm the just compensation amount recommended by a court-appointed three person commission, to which the government objected as too high. The District Court judge weighed the dueling appraisals for the property, which were based on one portion being suitable for residential development and the other for light industrial use. The District Court judge accepted the appraisal which took into account testimony of a time-line for future development, and rejected the government’s argument that potential residential or industrial development was too speculative, and should not be considered when establishing the fair market value for the land.

Determining just compensation in such cases requires two appraisals: one of the fair market value – the highest and best use of the property – and another based on the remaining uses of the property after the restriction in use. As a practical matter, the government (the taker) will provide appraisals establishing a low amount for the former and a higher amount for the latter (the landowner usually provides appraisals showing the reverse). The Circuit Court based its decision on the principle of deference to a District Courts findings of value in such matters, so long as they are based on reasonable evidence (appraisals).

In its review of precedential case authority, the 4th Circuit Court found that a comparable sales approach – a common appraisal technique that compares recent sales of like properties under similar conditions in reasonably proximate markets – that included development value drivers was reasonable. The court distinguished cases that found appraisals based solely on a parcel’s theoretical suitability for industrial or residential development. The Court opined that, when the road to development runs through considerable obstacles such as a requirement that numerous tracts with differing of owners be condemned (as in a reservoir project), the development value is too speculative to be considered. In this particular case, future development was found to be less speculative when dealing with one property.

This Court also had cause to review allocation of condemnation costs – including attorneys fees paid by the plaintiff – under the Equal Access to Justice Act (EAJA), and whether the government must pay. The EAJA requires that (quoting directly from the case): [T]he court must award attorney’s fees and other litigation costs to the private party if: (1) the claimant is an eligible individual with a net worth of less than “$2,000,000 at the time the civil action was filed” and (2) the claimant is the “prevailing party” in the litigation unless (3) the district court finds that the government’s position was “substantially justified” or “special circumstances make an award unjust.” 28 U.S.C. § 2412(d)(1)(A), (d)(2)(B). Only one of the owners of the parcel financially qualified, so the Court was left to determine whether the landowner was the “prevailing party.”

In a condemnation case, the “prevailing party” is the party whose appraisal comes closest to the highest valuation amount ordered by the court. In other words, if the difference between the landowner’s submitted appraisal and the final amount is equal to or less than the difference between the appraisal offered by the government and the final order, the landowner is the prevailing party.

In this case the landowners valued the land at $9,680,580, and the government $937,800. The District Court ordered a compensation amount of $4.4 million. Though the landowners agreed at trial with a lower appraisal ($5.5 million) offered by the commissioner panels appraiser, the fact that they had earlier offered their own appraisal testimony supporting a $9.7 million valuation doomed their argument for costs under the EAJA.

In regards to the EAJA and federal condemnations, the case effectively offers a disincentive for landowners facing condemnation to “shoot for the moon” when valuing the property for just compensation. If the landowners do fall below the $2 million net worth threshold, then it is less a consideration.