Find this article at:
go.ncsu.edu/readext?778835
— Written By Robert Branan 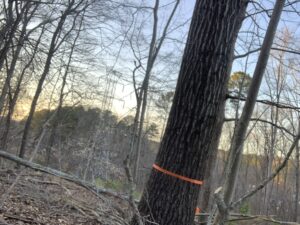 A recent opinion by the NC Court of Appeals addresses the value of ornamental trees and shrubs (“ornamentals”) removed by an easement or right of way holder. The case  – King v. Duke Energy Progress, 2021-NCCOA-17 – concerned a right of way held by Duke Energy Progress (“DEP”) and its maintenance efforts to keep the power line easement clear by removing trees not within the easement boundary. The case illustrates application of NC’s timber trespass statute to ornamental tree removal. The case addresses a not-uncommon occurrence whereby  – when in doubt during routine easement maintenance  – an easement holder (often a utility or their contractor) may cross the easement boundary and cut trees outside the easement. The case stands for the proposition that aesthetic value may be considered in remedial damage calculations for timber trespass on real property held for personal use.

The Plaintiffs own a parcel of land in Laurinburg, North Carolina, where they reside. The parcel abuts a power line easement in favor of DEP. A contractor for DEP  – while performing clearing activities in the easement – took down two “large” Japanese Maples and damaged a third which were outside of the easement boundary. These maples effectively obscured the view of the powerlines from the Plaintiff’s bedroom and sun deck. In the suit for damages, the Plaintiffs invoked NC’s timber trespass statute (N.C.G.S. §1-539.1) requesting double damages from DEP and its contractor. The court issued a directed verdict in favor of DEP following presentation of the evidence, thereby releasing the jury from deliberation of the damages. The trial judge awarded the Plaintiffs nominal damages (Note: under North Carolina common law, the tort of trespass requires a showing of damages.)

The Court explained that North Carolina courts have recognized two valuation methods for severed timber in a trespass action. First is the market value of the timber once severed (established in Jenkins v. Montgomery Lumber (NC 1911) [1]; the second measures the value of the land before and after the timber is severed (Bennett v. Thompson (N.C. 1851). [2] As for ornamentals and fruit trees, courts apply the second measurement, whereby trespass damages are measured as the value of the land before the ornamental or fruit tree is cut, and the land value after. Though the NC statute that recognizes the civil action of timber trespass provides a multiplier to the measure of damages, this multiplier is based solely on the commercial value of the timber once severed. [3] This effectively leaves diminution in property value under NC common law as the measure of damages.

As to the second issue, the Court noted that NC courts have recognized “replacement cost” of trees to establish diminution in real property value used for personal use.[4] The Court further explained that aesthetic value is a reasonable measurement of value for a jury to consider when determining diminution in value of the real property.[5] Therefore, evidence of aesthetic value may be factored into a jury’s consideration of damages.

The Court thus held that  – at least when the severed trees have no commercial value – evidence of “remedial measures” including replacement and restoration cost (including aesthetic value) may be considered by the jury when the property is held for personal use.

Note that this is a published opinion, which now bears the weight of law in North Carolina. The case addresses a not-uncommon occurrence, particularly in power line and pipeline easements whose boundaries are not clearly visible, which most are not for the simple reason that the boundary of the easement is often measured from its centerline. In the case of gas pipeline easements, this is measured from the buried pipeline, which is difficult to discern. And while such easements are generally surveyed and platted in modern practice, the recorded plat likely does not reveal which side of the line a particular tree falls. Clearing contractors are forced to make their own judgement as to where the easement boundary line lies, and any tree near their estimated boundary is vulnerable.

And though this case dealt with ornamental trees (Japanese Maple) with no real commercial wood value, the case might be invoked to claim damages for the cutting of select trees that ordinarily would have wood value, such as oak, pine, etc. Though such trees have a commercial market, these trees can still have aesthetic value (obscuring power lines or pipeline stems and markers) or provide shade to a yard, a house or outbuilding studio, etc.). It is unclear from the case whether the aggrieved landowner can have it both ways: invoking the timber trespass statute (which does not state that it provides an exclusive remedy) while arguing the aesthetic value, particularly when such trees are brought down singly or in few numbers. The aggrieved landowner must determine the market for a few downed trees may be limited to a local craft mill capable of transporting the wood (versus the ready market for 20+ acres of such trees).