Find this article at:
go.ncsu.edu/readext?769336
— Written By Robert Branan

[Farmlaw Editor’s note: the final report discussed below – mandated by state statute – has been circulated in draft form. The broad outline below responds to concerns of landowners and communities about the solid waste future of solar PV materials, as well as the restoration of lands – in some cases valuable farmland soils – to agricultural or forestry use. Please address comments to rabrana@ncsu.edu.]

As solar photovoltaic (PV) facilities have grown in number and size over the past decade in North Carolina and elsewhere, discussion has accelerated on what is to become of the solar PV facilities – and their tons of equipment – at their end-of-life (EOL). The estimated EOL for a solar panel – under current technology – is 25 years, and solar PV facility leases, which average 24 years in a range from 20 to 40 years, try to seek to address the matter of decommissioning as a contractual matter between developer and landowner. 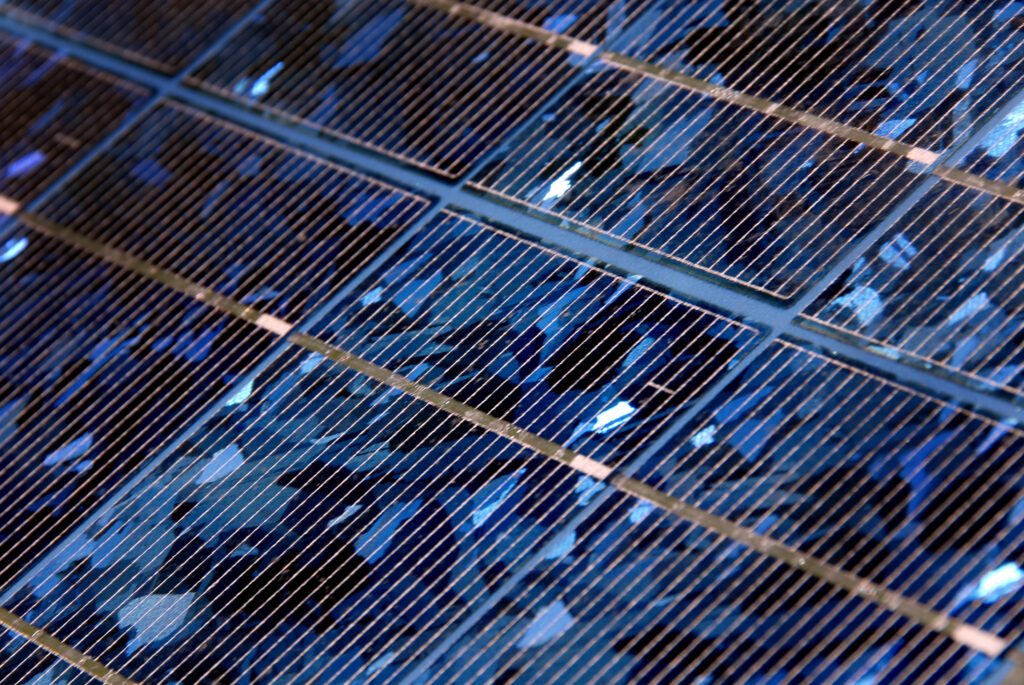 To aid in rulemaking to address public policy on solar PV (and other renewable energy) facilities, the North Carolina legislature passed HB 329 (S.L. 2019-132), requiring the NC Department of Environmental Quality (DEQ) to prepare a report to guide rule-making regarding decommission of solar PV and other renewable energy facilities and proper disposal of their equipment. The draft report, titled Final Report on the Activities Conducted to Establish a Regulatory Program for the Management and Decommissioning of Renewable Energy Equipment, provides a thorough discussion addressing many questions landowners and communities may have about solar decommissioning was issued on January 1, 2021, and was compiled the input and commentary of numerous stakeholders from the renewable energy industry, environmental organizations, and academia, including NC State University’s Clean Energy Technology Center. This Farmlaw entry provides a basic summary of the DEQ’s preliminary findings.

Under present technology, solar PV panels have an “economically productive life-cycle” of 25 years. Battery systems – still new and relatively few – have a 10-year EOL. The report notes that the EOL management planning horizon for disposal of the first tranche (French for “segment of a whole”) of installations is 10 years off, meaning a waste management plan will need to be in place by 2031. The only major wind facility in North Carolina – the Amazon Wind Farm in Pasquotank and Perquimmans Counties – has a 20 year EOL estimate with predicted decommission in 2037. 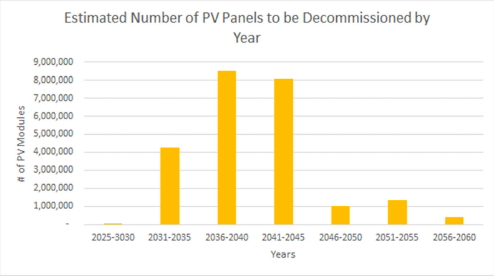 This figure is expected to double in the next five years. The report estimates that if all PV modules were disposed of today, this would account for 10% of the total tonnage of landfill waste that was deposited in 2018-19, and eventual disposal at EOL is not expected to negatively impact landfill capacity.

Given the 24-year average lifespan of solar PV modules, DEQ estimates that approximately 8.5 million PV modules will be decommissioned between 2036 and 2040, with another 8.2 million in the five years after. This represents a disposal of 364,000 tons over a ten year period.

The study predicts the current 4400 tons of wind turbine blades from the Amazon Wind Farm, made of fiberglass-reinforced blades with epoxy or polyester resin and not easily recycled under current recycling technology, nonetheless are not predicted to pose a strain on regional landfill capacity.

The report does call for legislation and rulemaking to add enhanced reporting requirements for facilities of 1MW or greater to aid in EOL management. Also, the report recommends a 10-year waste management plan as required of other generators of industrial waste.²

HB329 Section 2.(a)(1) directed the DEQ to determine “[w]hether or not any PV modules, energy storage system batteries, or the constituent materials thereof, or other equipment used in utility-scale solar projects or wind energy facilities, exhibit any of the characteristics of hazardous waste identified in 40 C.F.R. Part 261…” This is directive to a determination whether such materials must undergo special handling as mandated by the Resource Conservation and Recovery Act (RCRA) [42 U.S.C. §6901 et seq. (1976)] and North Carolina’s corollary legislation [N.C.G.S. §130A-294(c)], or, if not hazardous, may be disposed of as solid waste in landfills. Solar PV panels at EOL are not classified as hazardous under RCRA or North Carolina’s parallel regulations (N.C.G.S. 130A-290 et seq.. The accompanying regulations – 15A NCAC 13A – incorporate federal hazardous waste standards by reference).

Under the RCRA regulation scheme, a number of industrial wastes are known to exhibit one or more of four characteristics – ignitability, corrosiveness, flammability or toxicity – and are thus listed in regulations as hazardous wastes (See 40 CFR 261). The report summarized the composition of several solar PV technologies. For example, crystalline silicon solar panels – the predominant type installed in North Carolina – are 90% of their mass by weight glass, polymer, and aluminum, and contain traces of copper, zinc, silver, tin, and lead that generally test below toxicity test standards. Cadmium-telluride (CdTe) modules – the common “thin film technology” contain traces of copper, zinc, tin, and other metals, but are otherwise 98% glass, polymer, and aluminum.

The report is clear that operating components in use are not considered waste.¹ At EOL or earlier disposal (e.g. due to storm damage), the solar equipment is recommended to be tested under the toxicity characteristic leaching procedure (TCLP) test mandated by federal regulations. At that point, DEQ will make a determination as to whether the materials are classified as hazardous waste. The Report reveals that DEQ has already requested the American Society for Testing and Materials (ASTM) to develop a TCLP best practice sampling procedure for PV modules, and if such a program is accepted by the Environmental Protection Agency, DEQ recommends adoption in North Carolina rules for disposal of solar PV materials.

If solar PV modules are considered non-hazardous waste, they may be disposed of in municipal solid waste (MSW) landfills. Such landfills are designed according to RCRA with engineered liners, closure cap systems, and leachate collection systems. One half of the tonnage could be disposed of in landfills in 15 out of the 74 counties with solar PV facilities.

Lithium-ion – the most prevalent and fastest-developing technology in solar PV energy storage – may be classified if the components exhibit hazardous characteristics. However, the report noted that there is insufficient collection and storage infrastructure for lithium-ion batteries at industrial scale, and recycling infrastructure is not yet developed as batteries of this tech have yet to reach EOL or otherwise be decommissioned.

The report notes that recycling capacity for solar PV materials is still in development, adopting somewhat of a “wait and see” position while new recycling technologies continue to develop closer to the first tranche EOL horizon. The report emphasized that sufficient infrastructure for transportation will be needed, and that as the recycling market develops, recycling will require materials hauling over greater distances (to facilities out of state). The report does suggest creation of an online list of energy equipment recyclers (in state and out of state) modeled a similar registry of electronics recyclers at some future date (See N.C.G.S. 130A-309.142).

Another topic posed in HB 329 for address by the report was whether a fee system should be established and paid by manufacturers to support a stewardship program for EOL management (including recycling). Seeing this as a disincentive – and given that recycling capacity for solar PV equipment is nascent – the report recommended against such a rule at this time, though noting it may be considered in the future. The report notes that a similar program is in place regarding manufacturers of computers and televisions (See N.C.G.S. §130A.309.130-142).

Solar facilities have an average lifespan of 24 years out of a range of 20 to 40 years. A concern for landowners entering a solar lease – as well as their communities – is what happens to all of these panels, supports, wires, conversion boxes, and the fencing surrounding the facility when the lease term ends or is abandoned earlier than anticipated? [The latter it should be noted is highly unlikely given the continuing financial return of an active facility.] All solar PV facility leases should contain language placing responsibility on the owner of the facility to remove the personal property (the solar PV equipment) from the leasehold premises (and restore the property to suitability for its original use). However, a question looms: will the owner at the time of removal have the money to pay for removal? Because lease interests routinely change hands through sale, the landowner cannot predict the financial health of the eventual owner.

Cost estimates for decommission of course vary by size of facility. By way of example, one currently proposed 960 acre (80 megawatt [MW]) facility in Halifax County, Virginia (which borders Person County, NC) has an estimated removal cost of $2,013,600.² Such figures often accompany an estimate of salvage value, which can either off-set or subsume the removal cost.

The DEQ Report essentially defers for five years the study of a mandated financial accountability requirement. The Report suggests that a future stakeholder study “evaluate the feasibility of tying such financial instruments to applications the Commission receives for new projects and methods for capturing financial assurance information for existing projects.” Such deferral should not discourage landowners (and their attorneys) from insisting on financial protection in the form of a removal bond or letter of credit.

¹ Though there are concerns about damaged panels and leaching of toxic substances, at least one study has found undamaged panels. See Robinson, S. and Meindl, G., Potential for Leaching of Heavy Metals and Metalloids from Crystalline Silicon Photovoltaic Systems, Journal of Natural Reources and Development, May 2019.

² Maamari, Lea, Decommissioning of Solar Sites: A Key Consideration of the Project (SolUnesco 2018). The engineer preparing the estimate put it at 42% of the estimated salvage value of $5,000,000.