Find this article at:
go.ncsu.edu/readext?701436
— Written By Robert Branan

The following few items take a cursory look at agricultural, environmental and natural resource law developments from the past week ending June 13, 2020.

Multiple ag press outlets report that the producers of two of the dicamba products canceled last week by the Environmental Protection Agency (EPA) have intervened in the 9th Circuit Court of Appeals case concerning EPA’s 2018 conditional approval of several dicamba products. BASF, producer of Engenia, and Corteva, producer of FeXapan (originally registered by DuPont), filed notices of intervention in the case. Until the June 3 ruling, neither product was part of the case.

According to Corteva’s news release:  “Corteva is seeking to intervene to preserve our rights and to support the rights of customers to use the impacted dicamba weed control technologies. We believe dicamba is an effective weed management tool for farmers when used according to the label. We also seek to preserve the role of the U.S. EPA to administer the Federal Insecticide, Fungicide & Rodenticide Act (FIFRA), including granting or canceling crop protection product registrations, for the benefit of agriculture and society.”

And according to BASF’s news release:  “BASF has now made the request to intervene after careful consideration of the sudden and severe financial impact vacating the registration has had on farmers during this critical application time, when farmers now have less than a month to protect millions of acres under threat from resistant weeds. The Ninth Circuit’s decision has caused immediate chaos among the agricultural community and threatens the livelihood of countless U.S. farmers.”

Prior to the intervention of BASF and Corteva, the Plaintiffs in the case – including the National Family Farm Coalition – filed a motion in response to EPA’s cancellation order on the grounds that it allows the continued use of the de-registered dicamba products up through July 31. The motion requests a finding of contempt for EPA Administrator Andrew Wheeler for “not just failing to substantially comply with, but blatantly and intentionally violating the entirety of the Court’s Order.”

The United States District Court for the Middle District of North Carolina has vacated provisions of North Carolina General Statute § 99A-2, known as the Property Protection Act. A so-called “Ag Gag” law by critics of such farm protection legislation, the plaintiffs in the case – including People for Ethical Treatment of Animals (PETA) and the American Society for the Prevention of Cruelty to Animals (ASPCA), successfully challenged the law on First Amendment grounds. Read the Court’s full order

The law was modeled on a template produced by the American Legislative Exchange Council titled the Animal and Ecological Terrorism Act, which has been adopted in Kansas, Iowa, Idaho, Wyoming, and Utah, but struck down by courts in those states. Though the North Carolina law is neutral on its impact on agriculture and farming, critics of the law maintain that it is designed to support the swine and poultry industry from harassment by animal rights advocates.

The North Carolina law creates a right of action on behalf of employers against employees who trespass on parts of their property without permission to collect information, with recoverable damages up to $5,000 per day, plus attorney’s fees. The Act also holds accountable those who intentionally directs, assists, compensates, or induces another person such trespass(i.e. animal rights organizations). The Court found that the wording of the statute (specifically words bolded below) bound the statute closely to an infringement on protected speech. The provisions of the law under scrutiny were:

(1) An employee who enters the nonpublic areas of an employer’s premises for a reason other than a bona fide intent of seeking or holding employment or doing business with the employer and thereafter without authorization captures or removes the employer’s data, paper, records, or any other documents and uses the information to breach the person’s duty of loyalty to the employer[;]

nd thereafter without authorization records images or sound occurring within an employer’s premises and uses the recording to breach the person’s duty of loyalty to the employer[;]

(3) Knowingly or intentionally placing on the employer’s premises an unattended camera or electronic surveillance device and using that device to record images or data[;]

(4) Conspiring in organized retail theft, as defined in Article 16A of Chapter 14 of the General Statutes[; or,]

(5) An act that substantially interferes with the ownership or possession of real property.

The Court tied language in the statute to free speech and struck down the relevant provisions, specifically sections (b)(2) and (b)(3) as facially unconstitutional, and sections (b)(1) and (b)(5) as unconstitutional as applied only to the plaintiffs in the case. However, the Court found that failure of the free speech elements did not invalidate the entire statute, and it held that the NC General Assembly clearly intended – though in absence of express language – that surviving clauses be severed. Hence, §§b(1), b(4), and b(5) are still on the books.

Earlier in the litigation, Defendants – including the State of North Carolina and, by intervention, the North Carolina Farm Bureau Federation – successfully dismissed the case on grounds that plaintiffs did not meet the standing requirements established by the landmark case of Lujan v. Defenders of Wildlife, 504 U.S. 555, 561 (1992), which primarily require a plaintiff to show a concrete injury as a result of (in this case) government action. The 4th Circuit Court of Appeals reinstated the case on the grounds that the effect of the law was to “chill” their right of free speech. The Middle District Court reaffirmed this position in its order.

The state of North Carolina – as well as intervenor NC Farm Bureau – have a time-limited option to appeal the decision back to the Fourth Circuit Appeals Court in Richmond, VA. 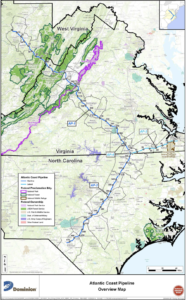 The ruling in the case of United States Forest Service v. Horsepasture River Preservation Association (No. 18–1584) overturns the 4th Circuit Court of Appeals holding that the ACP cannot transect the subterranean estate below the Appalachian National Scenic Trail (the famous “AT”) absent a specific act of Congress. Specifically, the 4th Circuit overturned the US Forest Service’s issuance of a right of way permit for the ACP pursuant to a requirement of the Mineral Leasing Act (“MLA”) for such an easement across public lands, reasoning that the AT is under the jurisdiction of the National Park Service (NPS) with greater restrictions on land use. As such, the 4th Circuit reasoned that the AT fell under the MLA’s prohibition of such pipelines crossing national park land, and as such, only Congress has the authority to countermand a directive in federal legislation.

The Court held – in an opinion by Justice Clarence Thomas – that the delegation of management over the AT to the NPS did not itself change the nature of the land over which the AT runs, at the proposed pipeline crossing, in this case, the George Washington National Forest unit. Justice Thomas reasoned in the end that such an administrative decision – to transfer management authority within divisions of the federal agencies (i.e. USDA Forest Service to Department of Interior NPS) – did not amount to, in absence of statutory language concerning the transfer, an expansion of national park land. In other words, the administrative transfer of management did not do something that only Congress can do:  create a national park. He also reasoned that – by implication – such a decision would render the private and state-owned lands over which national trails – including the AT – run to the authority of the National Park Service.

Justice Sonya Sotomayor and Justice Elana Kagan dissented in the case, resting on the plain language of the National Parks Organic Act, which states that “any area of land…administered” by the Park Service for “park, monument, historic, parkway, recreational, or other purposes” is part of the National Park System, and as such, part of the MLA’s easement prohibition.

Though a victory for the ACP, there are still numerous active challenges to the pipeline in the federal courts, including various procedural challenges under the Natural Gas Act, the National Forest Lands Management Act, the Clean Air Act, and the Endangered Species Act.